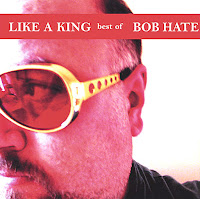 When the news came in the winter of 1999, it was shocking and brief. “Our hearts break tonight. We’ve lost our leader and friend. Bob Hate is dead.”

The message, posted on a fan website, came from bassist Buck Rudolph, a member of Bob’s last band, Kansas City. The outpouring of grief was immediate as fans found their way to the Dallas, Texas, compound where the beloved bandleader and songwriter had lived with his second wife, Ellen Mason.

“We just saw him last week,” a young fan sobbed. “He told us to stay in school and stay off the pipe.”

But almost immediately rumors began to swirl. $4500 was drawn on one of Hate’s credit cards two weeks after his funeral. Rudolph moved from Texas to New Jersey, taking with him – as he’s claimed recently – several demos of unreleased songs that he and Hate had been working on with a tall and severe new drummer known only as Tax.

But that story can wait. What is known for sure is that Hate disappeared in 1999, taking with him an unusual rock and roll legacy.

Born William Robert Simmons in Bossier City, Louisiana in 1958. Young Will grew up quietly with his parents who owned the Crystal Whip, a decades-famous rock club that was home to countless 70s rock and blues acts. “He was this little fat kid who hung around all the cats who came through,” said Dave Phalen, longtime doorman at the Whip. “He soaked it all in. He’d sit there eating ham and cheese sandwiches until it was bedtime.”

When Will was 17, he started his first band, Grand Theft Otto. They played blues and southern rock at the Whip on weeknights. But in 1977 he left home to start college in Reno, Nevada. Instead of attending classes, Will began playing open mic nights and working on his own songs.

After leaving college early, Will, using the moniker Bobby Wheels, landed in Albuquerque, New Mexico. There he started a straight rock band, The Wheels, that quickly rose to the top of the food chain for southwest regional rock bands with fat lead singers.

It was in 1985, however, that the Bob Hate saga really began. While the Wheels were stranded at a rest area near the Texas border, Chet Hix, a full-blooded Choctaw Indian, pulled alongside offering battery cables and a jump. After Hate and Hix shared a bottle of Pepsi and the band’s last 15 donuts, the two knew enough about each other to talk songwriting, Los Angeles Lakers basketball, and which of the original Charlie’s Angels was worth going to jail over.

Within six weeks Hate and Hix had left The Wheels behind and started a new group, the so-called Eddy band.

Most of the story after that is well chronicled. The band went nationwide in 1991. The money poured in. The boys found wives and bought houses that made MC Hammer’s place look like a toolshed. A vicious on-stage argument broke the band and the partnership up and put a wedge between them in 1994. “Bob would hate for me to say this,” Hix said, “but after the breakup he came to my boat and cried like a baby. I told him to forget it. That we’d had a good run. I encouraged him to get a trade of some kind, something steady. He was always good with cables and wires.”

Hix moved to Georgia where he bought nine hundred acres of land and wrote several failed screenplays before he broke through with the 2004 Oscar winning Vin Diesel film “Jesus Frankenstein.”

Bob continued to tour and record with a new band, Kansas City.

And then he was gone. This posthumous greatest hits collection was already in progress when Buck Rudolph arrived at Moonguy Records in Ft. Lauderdale, Florida, with a dozen unknown Bob Hate recordings. The date on them, he said, was 1998, from a session he had played on about 6 months before Hate’s death. But as soon as Moonguy president Steven Carter began listening to the material, doubts arose. The digital compression ratio on all of the discs was too high for pre-2000 equipment. The recordings were made after his death, and the news hit fans and rock journalists like a jolt.

“Bob Hate lives, isn’t that what they used to write on his headstone,” Rudolph said in an interview in Slice magazine this year. “He’s in me, in his fans. He’s in the old songs and the new.”

So, we’re left with this document. 16 songs, 8 of them never heard before, their recording date a mystery, their creation just another part of the myth. Rather than wonder anymore, just listen to these tracks. Four wheels, two lives, one more last ride. Bob Hate lives.